“This is a partisan power grab, plain and simple. Rather than spending time right now to set up and prepare for our redistricting process — including convening the Commission and passing required public engagement legislation — the Republican supermajority is instead focused on legislating how best to tilt the scales of our process to favor one party over the other,” said Katy Shanahan, Ohio State Director for All On The Line Ohio.

President Huffman’s amendment would let Republican legislative leadership intervene on behalf of both the legislature and the Redistricting Commission. It would also allow them to hire private legal counsel — on the public dime -— to represent them in court. The amendment does not allow Democratic caucus leaders, Democratic members of the Commission, or any other individual or group of legislative members to do the same.

“In 2015 and 2018, Ohio voters overwhelmingly supported reforms to ensure that both Republicans and Democrats have a say in how district lines are drawn. Instead of respecting voters’ wishes, the Senate Republican supermajority is actively trying to cheat the new system,” said Desiree Tims, President and CEO of Innovation Ohio.

This change comes as a last-minute addition to Ohio’s massive operating budget bill, which is thousands of pages long and months into its legislative process. The bill has already passed the House and is scheduled to pass the Senate today, leaving no time whatsoever for public testimony.

“No matter our differences, we Ohioans deserve to have our voices heard. The Republican supermajority’s amendment would let them use tax dollars to do the exact opposite of what the people told them to do. They want to use our money to silence Black, brown, and other marginalized communities who are not fairly represented in the map-making process. Without fair representation, our issues are not prioritized. It’s shameful and unacceptable,” said Prentiss Haney, Co-Executive Director of the Ohio Organizing Collaborative.

The Equal Districts Coalition urges Ohioans to contact Statehouse leaders to demand this provision be removed from the budget during Conference Committee: 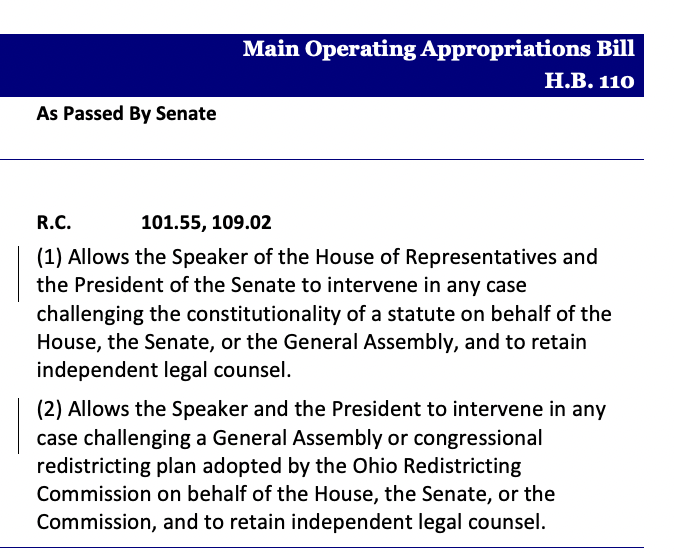 6.13.2022
Desiree Tims Condemns DeWine’s Repeated Failure to ‘Do Something’ About Gun Violence