January is nearly over, but neither the House or Senate has finished the organizational work of electing leadership, organizing into committees and introducing legislation. We are seeing slow but steady movement that suggests things will be up and running by mid-February at the latest.

From LSC’s Guidebook for Ohio Legislators, here is what being elected to leadership means to a lawmaker’s salary (note, these are current 2018, and are set to increase as a result of legislation enacted during lame duck):

Nothing is official until the full House reconvenes and holds a floor vote, expected to take place on Wednesday, February 6.

The Senate cancelled its only session scheduled for this week, meaning that neither chamber will get to the work of assigning members to committees and introducing bills until at least next week.

We noted last week that Speaker Householder had appointed members from both parties to a special committee to recommend the rules under which the chamber will operate for the next two years. The panel is holding a meeting this Wednesday, when it could vote to adopt rules, or determine that more work is needed. Groups and individuals wishing to submit suggested changes to the House rules need to act quickly — amendments must be submitted 24 hours in advance, meaning members need to get them drafted by tomorrow at the latest. 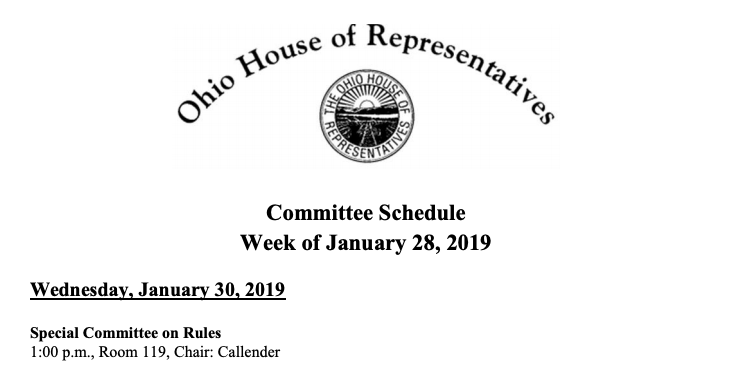 While neither the House or Senate has finalized its list of committees and corresponding membership for the upcoming General Assembly, we are starting to see members named to many of the joint (House and Senate) committees that serve important oversight roles. Here are some of the appointments made last week: